Taller : Distintive festivities in the USA

The history of Groundhog Day

The name Punxsutawney, the town in Pennsylvania where the groundhog ceremony takes place every year, comes from the Indian name for the location “ponksad-uteney”, which means “the town of the sandflies”.

When German settlers arrived in the 1700s, they brought the celebration of Candlemas with them. German tradition holds that if the sun comes out on Candlemas, the hedgehog will see its shadow and six more weeks of winter will follow. If no shadow is seen, legend says spring will come early.

The German settles in Pennsylvania continued the tradition but used a groundhog rather than a hedgehog.

The first official Groundhog day was on February 2, 1887, at Gobbler’s Knob, about 65 miles northeast of Pittsburgh, although its first reference can be found in 1841.

Today it is celebrated in the US and Canada, with the most popular ceremony in Punxsutawney, although there are several others across both countries. Crowds in Punxsutawney can be as large as 40,000, and have increased in popularity since the Bill Murray film.

Punxsutawney Phil, the world’s most famous groundhog, has seen his shadow nearly 100 times, has not seen it 15 times, and nine years are unaccounted for – but it should be said he only has an accuracy rating of 39 per cent.

The commercially and critically successful 1993 Murray film is about Phil Connors, an arrogant weather man sent to cover the Punxsutawney ceremony. He subsequently lives groundhog day repeatedly until he gets the day “right”. In 2006, the film was added to the United States National Film Registry as being deemed “culturally, historically, or aesthetically significant.” 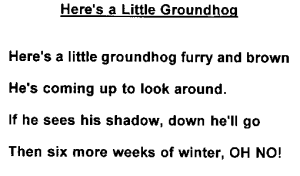 April Fool’s Day started in the sixteenth century in Europe. Before that time, New Year’s Day was celebrated on April 1st. Then a new calendar was introduced called the Gregorian calendar. January 1st became the first day of the year, but many people did not know about it. So those who continued to celebrate New Year’s Day on April 1st were teased. They were called fools.

Nowadays we play jokes on people on April 1st. For example, someone might put salt in the sugar container so another person could “accidentally” put it in their coffee. Or someone might change the time on another person’s alarm clock so that person would unknowingly wake up earlier or later than planned. Or maybe a person would tell a lie to make someone else shocked.

After we play the trick, we say “April Fool.” Then the poor person realizes he was fooled. It is generally done in the spirit of fun and doesn’t cause any real harm to anyone. Do you have any great jokes to play on anyone today? Try it out. Just don’t forget to say “April Fool” when the other person begins looking a little confused

Independence Day in the United States is also known as the Fourth of July. It is a national holiday that commemorates the Declaration of Independence on July 4, 1776. This was the day the USA was born and became independent from Great Britain. The terms “Independence Day” and the “Fourth of July” are a well-known part of the USA’s cultural language. People celebrate with national pride. There are fireworks, parades, sporting events and lots more. It is one of the biggest days on America’s holiday calendar. Politicians make speeches celebrating America’s history and traditions. In particular, attention turns to Thomas Jefferson’s speech that declared the United States of America as an independent nation.

Independence Day is a red, white and blue affair. The whole of the country displays American flags and banners. There are many festivals that enact famous events from America’s history. It is also a day when the nation gets outdoors. Picnics and barbecues with family and friends are the most popular ways to celebrate. In the evening, there are thousands of fireworks displays across the country. One of the most popular is the Macy’s department store show on New York’s East River. This is televised nationwide by the NBC TV channel. Also in New York, you can witness the Hot Dog Eating Contest on Coney Island. Indeed, American food is of course a big part of the day and millions of hot dogs, burgers and pizzas are eaten.

National pride: Love of and devotion to one’s country. Fireworks: A device consisting of a combination of explosives and combustibles, set off to generate colored lights, smoke, and noise for amusement. Parade:  An organized public procession on a festive or ceremonial occasion. Speech: A form of communication in spoken language, made by a speaker before an audience. To enact: To act (something) out, as on a stage (in this context). A fool: someone who doesn’t understand what is happening. To tease: laugh at, make fun of someone, joke about something. To play a joke: (on someone)- to do something funny that another person doesn’t know about or suspect at first. In the spirit of fun: with an atmosphere of fun, just for fun, lighthearted. Container: something that holds something else, like a box, a bottle, or a jar. Groundhog: Marmota monax, that hibernates in the winter. Accuracy: Precision; exactness.